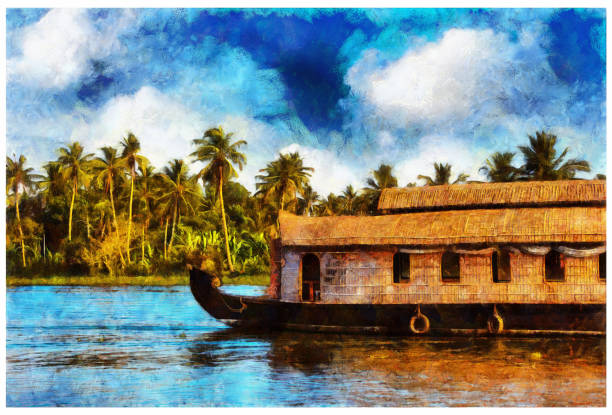 India is a diverse land filled with cultures and traditions. It is a secular country where people from different religions come up with their own methods and rules to lead a peaceful life.

When you look at the artwork created by artists in India, you will see a diversity that reflects different aspects of the society, portraits of Hindu Gods and Goddesses, Mughal Empire, episodes from Hindu mythology, a lot more.

Be it Indian paintings, clay art, or any other form of art in India; you will get a brief detailing of the ancient period. The beautiful artwork and sculptures you see in India will reflect the vivid culture that civilizations have followed for decades.

Unlike western art that depicts gorgeous sceneries, realistic society portraits, Indian art focuses on ancient and cultural art that roots you to the origin of many things.

You’ll commonly find paintings depicting some scenes from the Ramayana, Mahabharat, or portraits of Gods and Goddesses. Hinduism, Islam, and Buddhism have originated in India, and therefore it has a huge influence on the art and culture of India.

Scroll down to discover the History of Indian Art.

In ancient India, men drew sketches and craved stone to depict art. Archeologists had found proof of prehistoric rock art in India when they searched some caves in South and Central India. It is believed that it is almost 29,000 years old art, and it is marked as the beginning of Indian art.

During the Indus Valley Civilization, the art scripts depicted more animals in the creations rather than humans. Gradually, the shift took place when Buddhism originated in India.

The art created then was influenced by Greek culture. Later, Hinduism became the center of art, and the painting and sculptures were influenced by Shiv Tandav and various other Gods and Goddesses.

When the Mughals ruled India in the 16th Century, they influenced art and culture. And at this time, Islamic influence was at its peak in the country over everything.

Why do Indians have religious paintings in their homes?

Some Indian paintings have spiritual values, while some depict cultural importance. Indian’s believe in worshipping idols and pictures. Therefore, according to Vastu Shastra, they are suggested to place an idol or a painting at specific locations in the house to increase the positive energy.

Families that are firmly rooted in Hinduism have several religious paintings of the Gods that they worship. In fact, in schools or Gurukuls that teach children about Hindu mythology, you’ll see some of the most exquisite paintings that will leave you mesmerized.

While you are considering buying paintings that describe the rich Indian culture, tradition, and religions, ensure that you choose a platform that gives you quality and authorized illustrations. If you are a firm believer in Indian art and culture, you wouldn’t want to sacrifice the quality of products you buy from a store.

There are very few stores that have everything ethnic, and that too at a reasonable cost and excellent quality. Whenever you find an excellent online store where you can get your hands on rich Indian art and ethnic products, do not forget to check the testimonials for knowing the store better.

Also, read the terms and conditions carefully before you buy products so that you don’t find any difficulty in returning or exchanging the products at any time. So, what are you waiting for? Begin your search and buy authentic Indian artwork from a trusted online store.

How to Create an Amazon Marketing Strategy That Works

How Much Does a Dental Implant Surgery Cost?

Why Custom Boxes Are A Great Choice for Skincare Packaging?
What is the Sign of a Good AV Equipment?
Comment